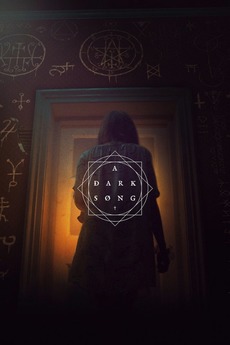 A woman grieving the loss of her son locks herself in a secluded house with a practitioner of black magic to perform grueling rituals meant to seek vengeance and forgiveness.

This is a hell of movie: it’s about the horrors of grief, loss, vengeance, and forgiveness, set within a dark and abusive relationship where neither party has any hope of getting what they want. Sophia is single-minded and focused on her goal, Solomon is damaged and flawed and consumed with his own agenda. There are really no traditional horror scares until the last twenty minutes, but it’s terrifying in its look into the nihilism at the core of both characters. It’s a very claustrophobic movie, locked inside a creaking, dark old house with two characters who are themselves locked into their consuming and impossible desires.

“A Dark Song” is also the perfect movie for a gloomy Twin Cities Marathon day; I couldn’t help but think of this day four years ago, when I did the marathon after months of plodding, consistent, ritualistic preparation. Pushing through the last six miles (a marathon is a 10K with a 20 mile warmup) was a lot like sitting in that charmed circle without eating or drinking for two days, or suffering through incantations with a festering knife wound and raging fever; there may have been demons dragging at me at some point, too. I can appreciate Sophia’s dedication to her stupidly single-minded goal despite all the urging of good sense.

Daily Horror Movie: We Are Not Alone