Daily Horror Movie: The Killing of a Sacred Deer

September 30, 2018 / Michael Hartford / Comments Off on Daily Horror Movie: The Killing of a Sacred Deer 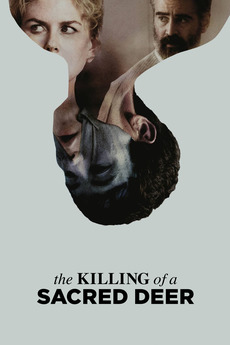 The Killing of a Sacred Deer

A respected cardiac surgeon befriends a teenager who turns out to be the son of a man who died on the surgeon’s table. The boy is a sort of agent of justice, a nemesis sent by the gods, maybe a messenger more than an actor in a cruel curse that must be played out to restore balance.

This is a strange and disturbing movie, made all the stranger for the tonally deadpan delivery of all of the actors but especially Barry Keoghan, who plays Martin, the boy. Everything feels like a slow playing out of inescapable fate, with all of the players resolved to their roles. The movie was inspired by Euripides’ Iphigenia in Aulis, and it has the feel of a Greek tragedy, where we watch the inevitable fall of the flawed hero with horror and pity.

Was it a horror movie? Not in the way something like “The Conjuring” is, with ghosts and blood and jump scares. But it has some unexplained supernatural mystery–how does the boy know the course of the malady that will afflict the doctor’s family? Does he cause it, and how?–and it has some gruesome aspects, like the children’s paralysis. And to the extent that horror descends from Greek tragedy (and what Greek tragedy doesn’t have some horrific aspects, with eyes gouged out and swords run through bodies and children served at dinner?), “The Killing of a Sacred Deer” is a terrifying return to the original form.